Seen from an office block high vantage point, thousands of commuters pour northwards over London Bridge against the direction of queueing buses and cars. It is a scene about the transient business community and mass transport. The working population arrives early for work over the bridge in the City of London's historic financial district. We see the sunlit faces of those walking towards the viewer which echo the red tail lights of the stationary vehicles. So gridlocked is the traffic on the southbound carriageway, there is a lone cyclist stuck and squeezed between the curb and a double-decker bus. On the other side of the road, the street is almost empty of motors adding to the drama and chaos. The City of London has a resident population of under 10,000 but a daily working population of 311,000. The City of London is a geographically-small City within Greater London, England. The City as it is known, is the historic core of London from which, along with Westminster, the modern conurbation grew. The City's boundaries have remained constant since the Middle Ages but it is now only a tiny part of Greater London. The City of London is a major financial centre, often referred to as just the City or as the Square Mile, as it is approximately one square mile (2.6 km) in area. London Bridge's history stretches back to the first crossing over Roman Londinium, close to this site and subsequent wooden and stone bridges have helped modern London become a financial success. 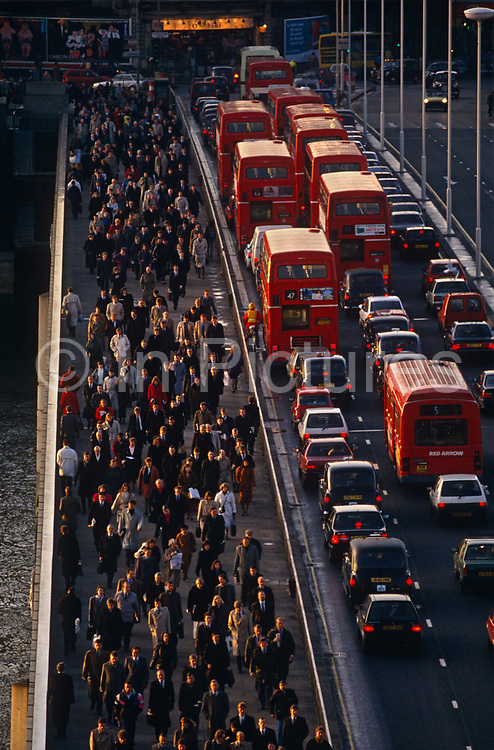