Fourth Plinth Sculpture The Invisible Enemy Should Not Exist

The 12th Fourth Plinth sculpture named 'The Invisible Enemy Should Not Exist' by artist Michael Rakowitz, in Trafalgar Square, on 5th April 2018 in London, United Kingdom. The artwork attempts to recreate more than 7,000 objects which have been lost forever. Some were looted from the Iraq Museum in 2003, while others were destroyed at archaeological sites across the country during the Iraq War. Rakowitz has recreated the Lamassu. This winged bull and protective deity guarded the entrance to Nergal Gate of Nineveh from 700 BC until it was destroyed by Daesh in 2015. The Fourth Plinth is an empty plinth in Trafalgar Square in central London originally intended to hold an equestrian statue. For over 150 years there was much squabbling about what to do with the fourth plinth, but very little agreement, until the temporary use of the plinth to display three pieces of art in the last years of the 20th century lead to a commission being formed to decide on a use for it. Eventually that commission unanimously decided to use it for the temporary display of artworks. 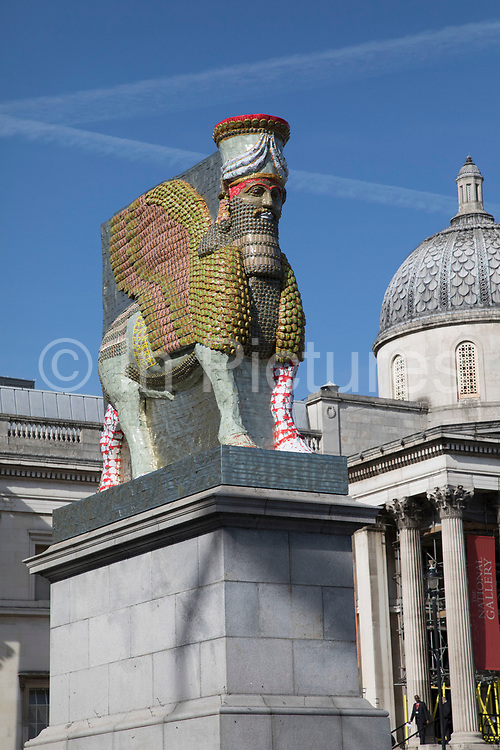