During an August heatwave, the population of Brixton and many others from all over London, bask in the glorious weather at the Brockwell (Brixton) Lido in Brockwell Park, Herne Hill, South London. The Lido is a magnet for families, select groups, the young and old and represents an amalgam of humanity who enjoy the benefits of outdoor bathing and the friendship of meeting old friends and new acquaitances. We see two men of Afro-carribean origin who have a corner of the Lido to themselves. One wears a towel wrapped around his lower-body and sits, arms folded with a look of territorial superiority while the other applies sun lotion to his leg. There is little space left on the full pavement which retains its solar heat long after the sun has left the quadrangle of the lido's oblong design but their colourful towels and possessions are spread out on the paving stones along with childrens' toys including an Action Man toy soldier who is also tanning himself. It is a scene of fun for all ages and backgrounds. Brockwell Lido is a large, open air swimming pool in Brockwell Park, Herne Hill, London. It opened in July 1937, closed in 1990 and after a local campaign was re-opened in 1994. Brockwell Lido was designed by HA Rowbotham and TL Smithson of the London County Council's Parks Department to replace Brockwell Park bathing pond. It is now a Grade II listed building 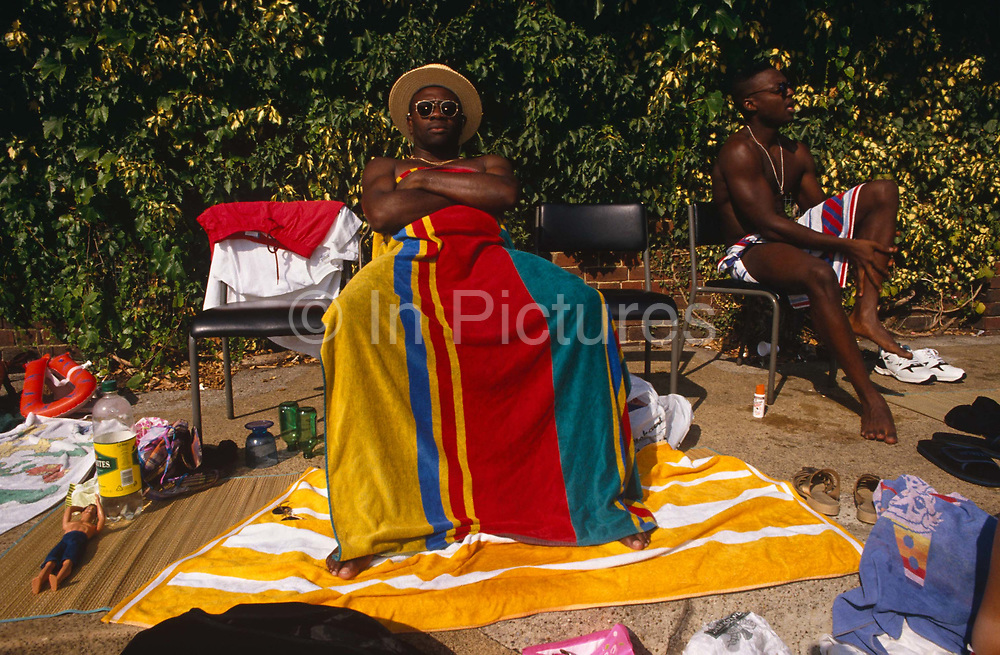